Environmental considerations, resource savings and economy do not always go hand in hand. But all elements formed a synthesis in a project in Lille Skensved orchestrated by VEKS and CP Kelco.

For a period of time, the pectin factory CP Kelco had focused on lowering the noise level from the cooling towers if the fan heaters produced noise when the surplus heat was to be blown away.
The noise stressed the surroundings and they considered building a noise deflection wall. However, CP Kelco was also aware of alternative solutions. What if it was possible to refrain from using cooling towers at all? Would it be possible to use the heat which is otherwise sent directly out in the open air?
Before CP Kelco built the noise wall, Køge Municipality had already invited the local businesses and supply enterprises for Køge Symbiose. The municipality's purpose of the symbiosis was to discuss whether they could benefit from each other. Not least whether the municipality had surplus heat which was lost. VEKS/Køge District Heating also participated in the Køge Symbiosis; the seed was planted to the project about the surplus heat from CP Kelco.

First, the municipality was behind a screening of the idea that Køge District Heating could utilise the surplus heat from CP Kelco. The screening had a positive result and was converted into initial, specific discussions about the project between CP Kelco and VEKS in 2012. Furthermore, the parties prepared a project proposal, without the intervention of the municipality, illustrating sustainability of all parameters. Instead of building a noise barrier, the parties figured out how to utilise the surplus heat for district heating. An idea which was technically possible by way of installing heat exchangers and two industrial heat pumps.
The project was approved by Køge City Council - the Danish Environmental Protection Agency was supervising authority. 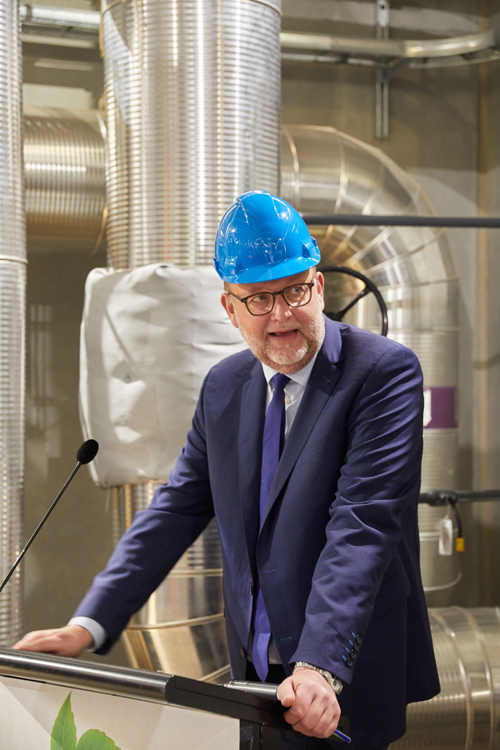 Monday 9 April 2018, the surplus heat project was officially opened by Lars Christian Lilleholt (V), Danish Minister of Energy, Utilities and Climate. In his speech, Minister Lilleholt mentioned that “the plant is a visible proof of the future heating sector. You have found the possibilities of surplus heat which would otherwise be a waste product. At the same time, you have solved a noise problem for the benefit of your neighbours. I would like to commend you for that. Well done! More businesses need to discover the path you have chosen.” Photo: CP Kelco.

Ministers participating in the opening

Technically speaking, an exchanger and a heat pump which were connected to Køge District Heating’s system was installed at CP Kelco’s factory in Lille Skensved. As mentioned before, the exchanger and heat pump replace two large cooling towers which were blasting heat into the air. The exchanger and heat pump raise the temperature of the district heating water from 30-40 degrees to the desired 75-85 degrees which is the temperature requirement in Køge District Heating’s system - summer and winter respectively.
District heating pipelines were already established in the transport centre in Køge which is close to CP Kelco. Thus, there was only a need for establishing a relatively short district heating pipeline from CP Kelco to the existing district heating system to ensure the sale of the surplus heat. This factor has been important to the economy of the project - combined with the recent positive development of very large heat pumps. The heat pump at CP Kelco can convert up to 460kW (approx. four million kWh per year).
In connection with the realisation of the project, CP Kelco has received energy-saving points pursuant to applicable rules. This has reduced the gross investments and thus reduced VEKS’ heating price in the long run.
CP Kelco owns and runs the surplus heat plant with a variety of heat exchangers and pumps. VEKS purchases the green surplus heat and sells it to Køge District Heating at the same price as other customers connected to VEKS’ transmission system. The surplus heat project alone covers the heat requirement of 2.200 households connected to Køge District Heating.
The project was subjected to test operation at Christmas time in 2017 and was officially opened by Minister Lars Christian Lilleholt on 9 April 2018 (see box).
This project could be the forerunner of similar projects where VEKS with advantage can convert even more surplus heat from businesses to green district heat - not only in Køge.

Through the ages, VEKS has “collected heat” where it could make sense. Even though the effect of this CP Kelco project would only constitute approx. 1.5% of VEKS’ total heat purchase, every little always helps.
Moreover, the cooperation between the two parties is not new. In recent years, VEKS has had the pectin factory CP Kelco as indirect collaborator. CP Kelco delivers waste by way of citrus peel for Solrød Biogas which feeds the VEKS biogas engine in Solrød.
Since the establishment, VEKS has learned the truth saying that special legal matters apply when the collaborator CP Kelco is owned by an American business. Negotiations and preparation of legal agreements had to go through and live up to American standards which do not necessarily comply with Danish requirements. Naturally, it has taken time for all the processes and decisions to be approved in Atlanta, Georgia.

Already in the summer of 2017, the project received an environmental award. CP Kelco had nominated VEKS and CP Kelco’s surplus heat project for the Huber family’s annual Sustainability Award (Mike Huber Award). The environmental project won the gold medal among 23 proposals that were sent to Huber Company which is owned by CP Kelco (see the box about Huber Company).
Why did this particular project win an environmental award? The honours were motivated by the fact that this project about surplus heat meets three substantial requirements, both creatively and together: The project offers good corporate economics, resource savings and has a positive impact on the local environment. This project lives up to the value set and sustainability profile of CP Kelco and the Huber Group. In connection with the award ceremony, four chief executives visited the factory at the same time in Ll. Skensved which has never happened before.

WHAT? When the project received the Mike Huber Award, VEKS’ CEO, Lars Gullev, mentioned, among other things, that VEKS is a non-profit business. “WHAT?,” Huber’s Chief Executive, Mike Marberry, immediately said. An extraordinary business model in the USA.

We use cookies to improve your experience by remembering your preferences, analyzing web traffic and showing you targeted offers in our online media.

We collect information about your favorite settings and choices on the website. We do this to be able to show you the version of the website that suits your preferences. The information is used to determine which region and language you prefer, to display videos and other visual elements on the website such as job search.