When VEKS “started operation” on 1 October 1987, the purpose was to save resources. The fewer re-sources the less environmental impact. Back then with the new transmission system, VEKS could to-gether with CTR utilise the surplus heat partly from waste incineration, partly from the large central CHP plants –VEKS primarily used Avedøre CHP Plant. The first big step was to connect the local district heat-ing companies in VEKS’ supply area to the transmission system. Thus, fuel oil, coal, and natural gas, which until then had been fuel in the local boilers, could now be replaced by district heating from VEKS – a process which was realised in 1990.
Surplus heat from waste incineration and CHP alone has resulted in an annual CO2 reduction of approx. 500,000 tonnes compared to if the customers had used oil or natural gas for heating.
From 1990 to 2000, VEKS aimed to reduce the emissions of CO2 where the focus was first and foremost on replacing  fuel oil with light gas oil or natural gas at the peak and reserve load centrals. Secondly, VEKS’ energy consultancy focuses on lowering the return temperature in the transmission system. A lower return temperature reduces heat loss and power consumption from pumping but also ensures an improved efficiency at Avedøre CHP Plant.
Moreover, 1990 is the year which is subsequently used as reference year to calculate the CO2 emission to which the district heating customers in VEKS’ supply areas have given rise.

In 2001, unit 2 of Avedøre CHP Plant was commissioned. The heat production of the new unit was based on natural gas and wood pellets which played a crucial role in connection with the CO2 emissions in the years ahead.
The Danish Energy Agreement from 2012 legislatively opened up - for Ørsted as the owner of Avedøre CHP Plant as well as VEKS - to adapting Unit 1 of Avedøre CHP Plant from coal to sustainable biomass, rendering it a financially attractive solution.
The same year, VEKS purchased the biomass-fired CHP plant in Køge which covers more than 10% of VEKS’ present overall heat requirements.
Since 2016, Denmark’s largest CHP plant, Avedøre CHP Plant, has produced heat from both units based on 100% sustainable biomass and thus replaced fossil the fuels, coal, and natural gas.
The biomass conversion at Unit 1 alone has resulted in an annual CO2 reduction of approx. 100,000 tonnes compared to if the heat production were based on coal. 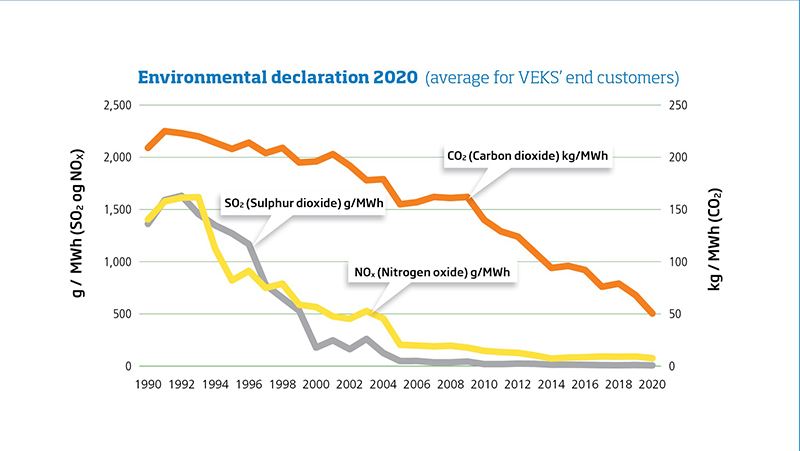 VEKS’ customers have reached the goal

VEKS is involved in a number of projects where all their goals contribute to the green transition – you save resources and thus reduce the CO2 emissions.

CP Kelco
Together with VEKS, CP Kelco has developed a project where surplus heat covers the heat requirements of 2,200 households – connected to Køge District Heating.
Originally, the focus was on lowering the noise level from CP Kelco’s cooling towers whose fan heaters produced noise when the surplus heat was blown away. A stressful noise problem was transformed into a surplus heat project where VEKS utilises the present surplus heat in the local district heating system instead of sending the heat up in the air in a noisy manner as it used to.
The effect of the CP Kelco project represents approx. 1.5% of VEKS’ total heat purchase and was official-ly opened 9 April 2018 by Lars Christian Lilleholt, the former Minister in power.
The surplus heat project alone has resulted in an annual CO2 reduction of approx. 10,000 tonnes com-pared to if the customers still used natural gas for heating.

VEKS Gasmotor
In the summer of 2015, Solrød Biogas A/S started producing gas. The annual production of biogas is approx. six million cubic metres for VEKS’ gas engine in Solrød. VEKS is involved in the project as the taker – the buyer of the biogas. At the heating plant in Solrød, VEKS has constructed a building for the purpose. It contains a gas engine which produces green electricity for the grid through a generator and at the same time it transforms the cooling water to district heating for VEKS’ system.
VEKS’ gas engine generates around 25,000MWh (25 million kWh) green electricity a year. The heat from the gas engine covers 1% of VEKS’ total sale of heating.

Through the years, VEKS has “collected heat” where it made sense. And more is on the way.
At present, experiences from a collaborative project about large heat pumps also involving VEKS are reaped concurrently with large-scale geothermal energy in the Copenhagen metropolitan area being a highly prioritised development area.
Together with Høje Taastrup District Heating, VEKS will put a pit heat storage of 70,000m3 into service in 2021/2022. The project has received EUDP aid which is the Danish Energy Agency’s funds to sup-port development projects.
The pit heat storage will utilise the district heating even better, as the district heating will be deposited when it is low-cost to produce - reversely, the stored heat will be used when it is too expensive to pro-duce. Therefore, the new deposit will benefit the total power and heat production in the entire Copenha-gen metropolitan area and will thus also benefit the green transition – especially because the local peak load production based on fossil oil or natural gas can be reduced.
The pit heat storage alone will result in an annual CO2 reduction of up to 15,000 tonnes.

“The fact that we at VEKS already reached the goal of 70% reduction in 2020 is something we can be proud of – proud of being part of a community whose focus has constantly been on green transition the last 30 years.

We have come across the finish line – and we will do even better in the years to come.”

In 2019, Denmark reduced its CO2 emissions by approx. five million tonnes from 51.6 to 46.7 million tonnes corresponding to well over 9%. The primary explanation to this is that coal to an increasing extent has been replaced by biomass since the coal consumption of the CHP plants dropped by 44% in 2019.

The statement shows that Denmark lacks a reduction of 23 million tonnes from 2019 level to reach the goal of the climate goals of 2030.

Source: Altinget 10 February 2021 based on figures from Aarhus University which is responsible for Denmark’s climate calcu-lations for the UN and the EU
(https://www.altinget.dk/artikel/204490- )

We use cookies to improve your experience by remembering your preferences, analyzing web traffic and showing you targeted offers in our online media.

We collect information about your favorite settings and choices on the website. We do this to be able to show you the version of the website that suits your preferences. The information is used to determine which region and language you prefer, to display videos and other visual elements on the website such as job search.